TIDES- how, where and when?

The effect of Mumbles's biggest tides. 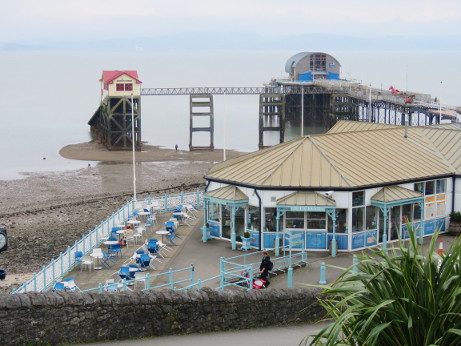 The high and low tides on the whole Severn estuary are much bigger than most other coastal areas. As a result, a given beach or cliff can look VERY different depending on the tide. Mumbles Pier old lifeboat station may appear about to be submerged, at what are called 'Spring' tides, or 6 hours later you may walk across to it with dry feet. ( See the man for scale)

But watch it at what are called 'Neap' tides and there is only around half the range, so it doesn't go out so far, nor come in so far.

Worth checking therefore before planning local coastal activities! Will we be able to get through Three Cliffs arch? Access Paviland from the beach? Will the sea be up the valley to Penmaen castle? Can I walk round to the Blue Pool? Onto the salt marshes or out to the lighthouses on Mumbles or Whiteford Point?

Surfing is best at certain stages of the tide on different beaches or reefs. Coastal fishing places are also greatly affected by tides- ask any expert on either!

Note that to cross to the Worm you get much the same length time slot at Spring or Neap tides- you just see a much wider surrounding area of rocks. 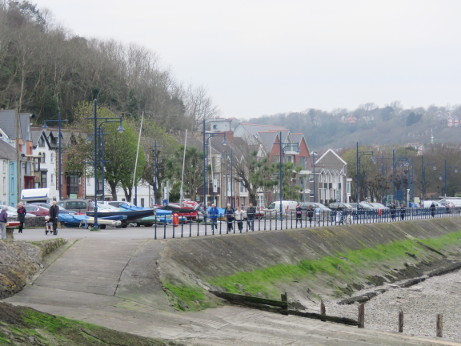 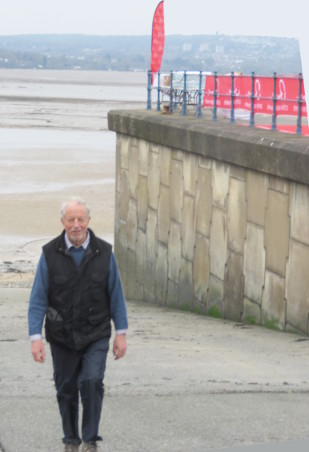 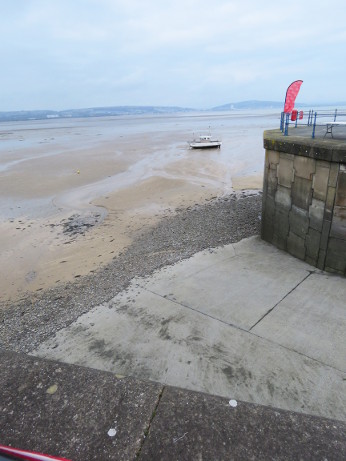 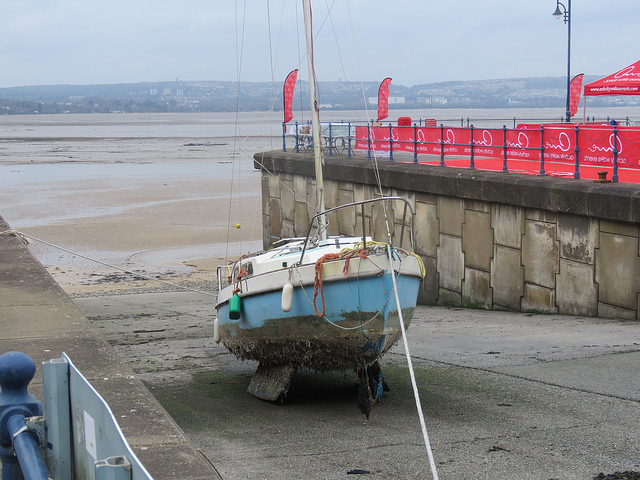 Tides are the rise and fall of sea levels caused by the combined effects of the gravitational forces exerted by the Moon and the Sun, and the rotation of the Earth. The Moon has about twice the effect of the Sun. Every 2 weeks ( approx), ie half a lunar month, the Sun, Moon and Earth are aligned and cause bigger 'Spring' tides. The word 'spring' is misleading- nothing to do with the season of Spring, but derived from the idea of 'springing into action' or being more forceful.

In between the Moon is 'out to one side' and the forces are less, giving smaller tides- the 'neaps'. 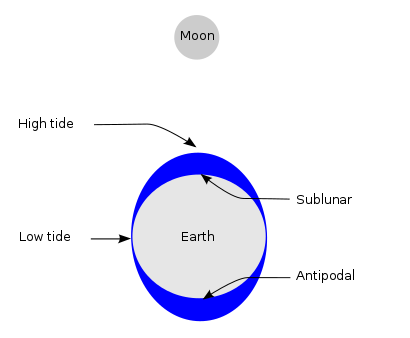 How can tides be predicted?

Careful records of the tide at one place can be analysed into a whole lot of separate smooth curves of different amplitudes and frequency. Add them all together and you can predict ahead into the future. The result is a curve like this.. 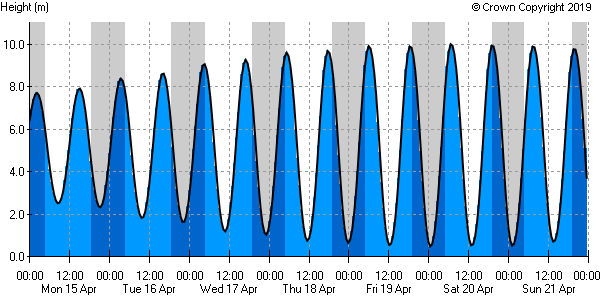 You can download the prediction for a week ahead for free, but for longer periods there is a charge. Bit of a cheek, that, since the data collection and analysis was funded by tax, and it costs next to nothing for a cheap computer to draw the curve, IF you know the constants that the Hydrographic derived. And they charge you for that!

Actually, if you download one week from the date of a neap tide you can stack beyond it a reversed copy for the next week, and duplicate that for a month, etc..

I wrote code to generate and add the first four curves, using the paid-for Admiralty constants. Note how there is always a small difference between the two tides on a given day.

What else affects tides?

These are however only predictions, the actual time and height of the tide is affected by wind and atmospheric pressure. Storm depressions allow both low tide and high tide to be moved upwards, and on Gower gales blowing from the South West also 'pile up'' the water above the predicted level.

There is a common belief that tides are always of biggest range at the equinoxes in March and September. Actually the basic tide is the same, but it happens that in the UK we get large storm depressions at those times as the jet stream move North or South between our summer and winter, so we have storm surges added to the basic tide.

When there is a big high tide the water surging up the Bristol Channel into the Severn piles up into a spectacular 'bore', a wall of water right across the river and advancing up-river at about six miles per hour. Good places/dates and times to watch are on the internet. Well worth making an effort for it. I went on a frosty early morning to see surfers, canoeists and even a powered paraglider gathered for the occasion!