Please note that the Society, as of July 2016, exists only informally. Our numbers and health have declined too much to sustain a formal organisation. However we will continue to meet on a less formal basis, thus taking a load off our officers!

Taunton Welsh Society had been celebrating our Welsh heritage for near 50 years, since the days when, with no Severn bridges & only occasional telephone calls, it could feel as if Somerset was a long way from Wales. We try now to meet roughly once a month in members' homes, at a pub, or at Temple Methodist Church. We liaise with the Welsh Societies of Bristol & Burnham for a number of occasions, including a Gymanfa Ganu in Bristol, and in the past a competitive Rally involving literary, art & craft sections. However these Societies too are struggling against the tide of numbers, age and health.

Next planned meetings are a bacon-butty breakfast in Kingston St Mary, and a Beetle Drive. Others are currently being planned. 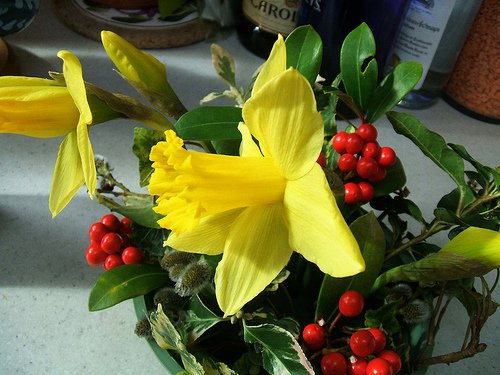 We kicked off with Jenny giving us a taste of Somerset, with beautiful photographs interspersed with readings of local poetry and others,

Clwyd has a 'back copy' of his inimitable literary output in Welsh and English over many years. He wove these into aspects of his life in a village in North Wales and elsewhere. Magic!

September's meetiing had Tim mixing memories of his childhood and upbringing, with musical asides.
Will Cann gave a great demonstration of a wide range of stringed instruments, from zithers to balalaikas to banjos-- and more!
In November, Dick Atkinson talked about his early years in the Howgills and the Lake District, when he accompanied his father visiting the hill farms selling seed, fertiliser and cattle feed. At this time the mechanised farming we take for granted hardly existed, and it was a battle against the elements for all the family, young and old- and a few horses. Dick showed us stunning photographs from early last century onward of isolated farms and local characters, with the backdrop of the Lake District mountains. This glimpse into a hard and beautiful world now past was narrated with humour and perception.
In December we held our traditional Christmas evening with carols, poems and readings in English & Welsh- followed by mince pies and hot punch. Marion Jones accompanied the carols on the piano.
The New Year Party was a fun sesssion with games and quizzes. We wished all our friends 'Blwyddyn Newydd Dda'- Happy New Year.
This year the formal St David's Day celebrations change in format. We will celebrate at an informal carvery at mid-day at Oake Manor on March 2nd. We always start our meetings with an item in Welsh or about the Welsh ( poem, article, music..) and always finish our meetings with the Anthem. We have members for whom Welsh is first language, second language- or the culture of a spouse.