Some LB projects I've played with.

Liberty BASIC is just SO versatile! Thanks, Carl! I've always found programming odd things is fascinating. LB allows me to do it so easily with a standard Windows front end. Mind you I look forward to the Linux version and LB5- I am not a fan of Microsoft's way of treating its customers!
Let me know of any problems or if you have ideas for improvements do e-mail me! New ones added occasionally.

A fun demonstrator of logarithmic and linear spirals, prompted by a topic raised in the conforum..

Now I've got to make it save the rotated versions of a particular one to make this animated HypnoDisk better! Current stopgap was rotated and cropped very roughly, by hand...

Available as superposition.bas
In my far-off youth I'd have had to draw this accuratel;y with rulers and compasses....

Visual demonstration showing the sieving as it happens as a visual analogue.

Available as sieve.bas
At some stage I'll modify to show the Ulam spiral version.

Just to make sure I understand how to send MIDI commands!

Theremins normally operate when you wave a hand near them rather than a mouse! Wave your mouse to control pitch and volume....

Solves visually the classic problem of drawing a circle to touch three others.

This shows animated diagrams of the aging of cohorts of males and females. Play Malthus and try to get a stable population!! 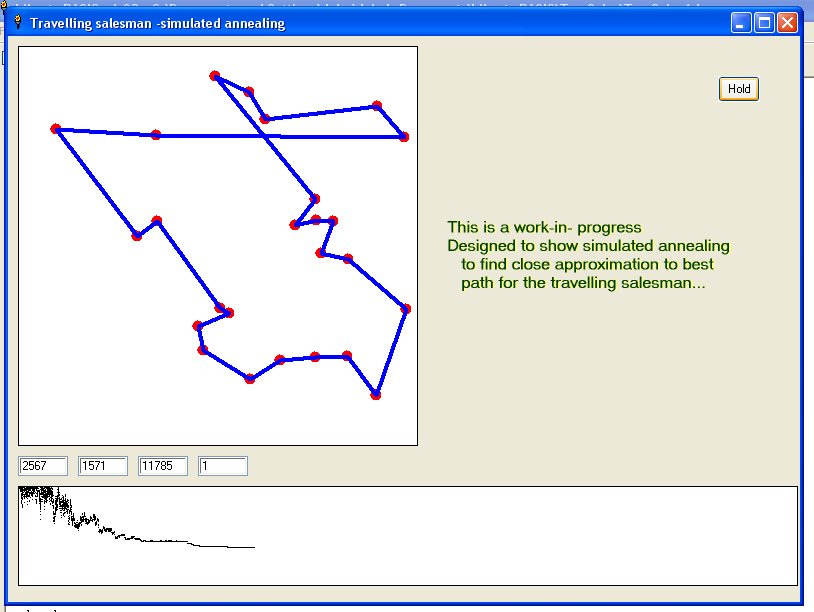 Have just done a CRO front end to display wav files as a CRO would show them. Needs further work. 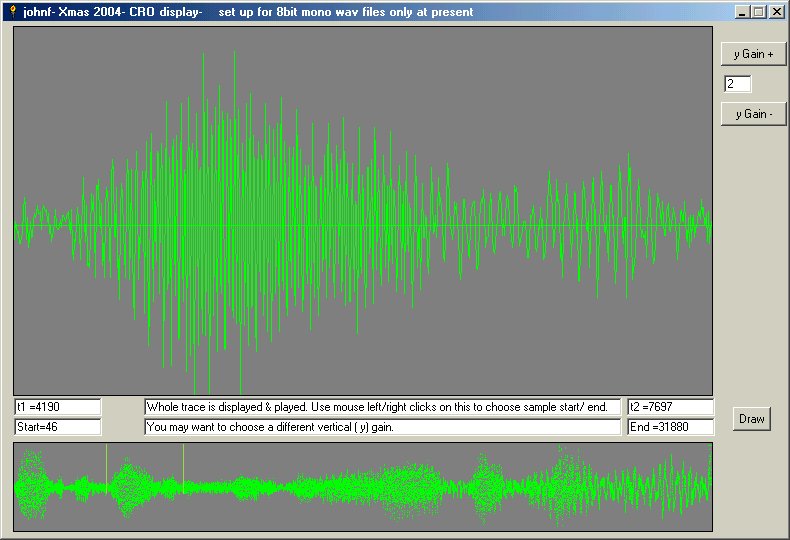 Available as a zipped file

I created this custom display for a student who'd scanned the sky with a photocell with altitude/azimuth coordinates & wanted a colour-coded display of intensity.
(Please note his data is a bit suspect!) 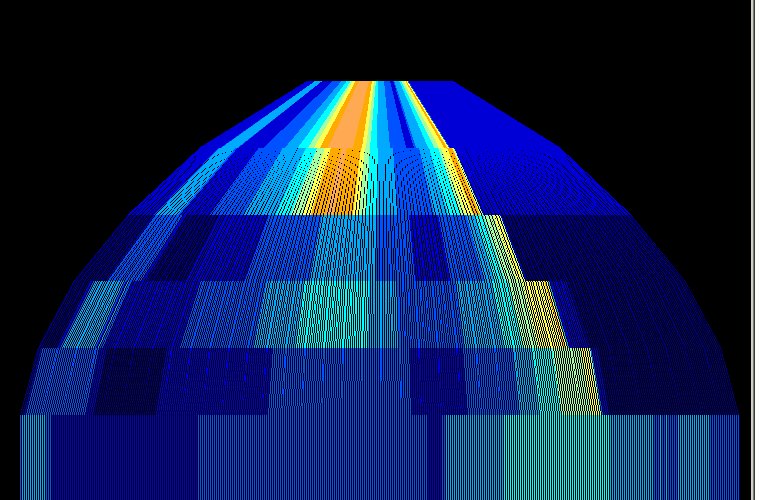 I finally wrote a Haiku generator.
Typical output is

A Travesty generator, based on the Byte articles back in the golden years. Creates various levels of travesty text based on a source text- those included are varied but supply your own too. Give it a sample of text in a style or language & it will generate drivel based on the letter frequencies AND letter sequence frequencies. 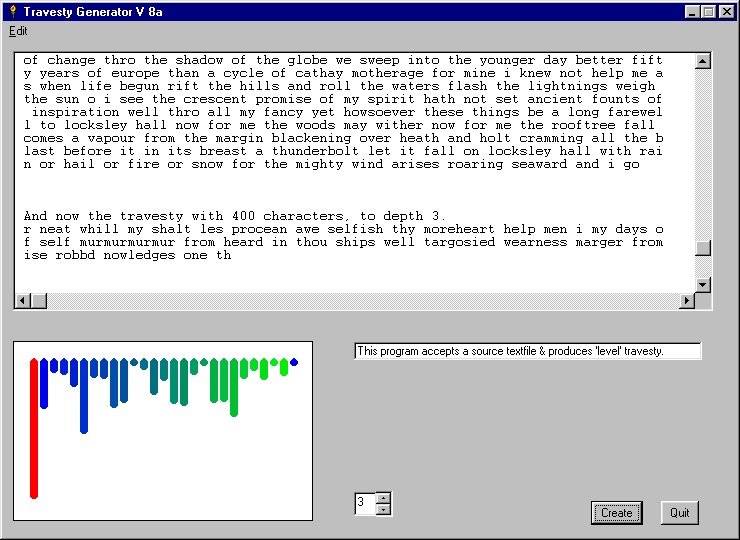 Better not let my American friends see what it made of the Declaration of Independence! Also fun to try on foreign text; Shakespeare; eecummings; or use a LB program as source text!

Try my 'Magic Eye' SIRD generator. (needed me to find the structure of bmp files) which takes a greyscale bitmap & creates a magiceye. Here in UK we sometimes send cards on Valentine's Day declaring (anonymously) our love. We did a trade in cards where if you stare long enough the name of the anonymous beloved suddenly becomes visible in the random dots. Our experience is that 1 person in 4 sees the result readily; and about 1 in 4 can never see them! Very frustrating for the latter... let me know if you can see this one.... which I change regularly & MAY not be anything other than a random pattern!!!

Anyone else improve my 3D surface generator- displays a function f( x,y) as a pseudo-3D figure. I must modify it now Carl has indeed added the EVAL function. I know you can do similar in Excel or similar but it is more fun to construct yourself a unique display. 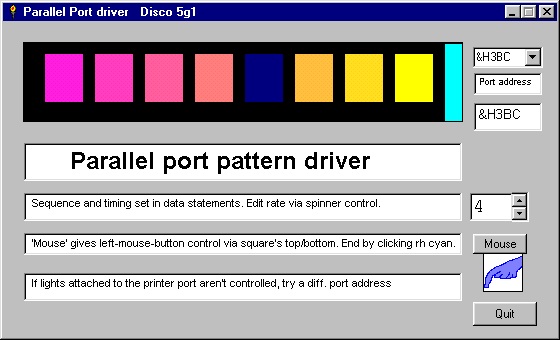 I use these as an attention-getter in my school & for disco lights etc. Last seen flashing in the days before Xmas 2002.

A data-gathering Reaction tester project. (as used over the last few years at my school) 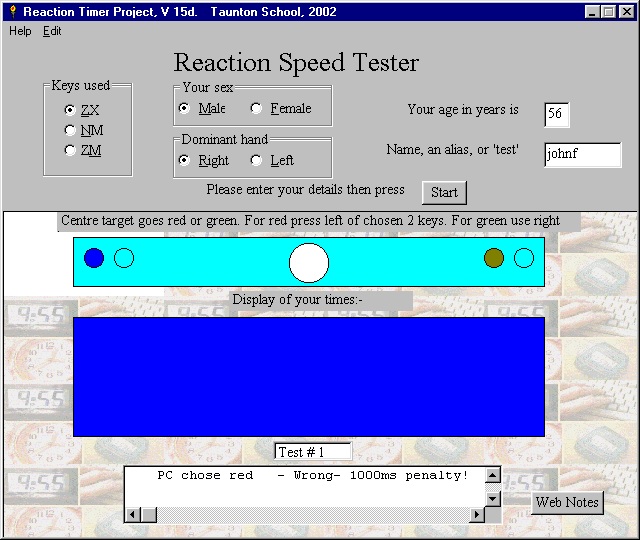 A version of a Kaleidoscopes. 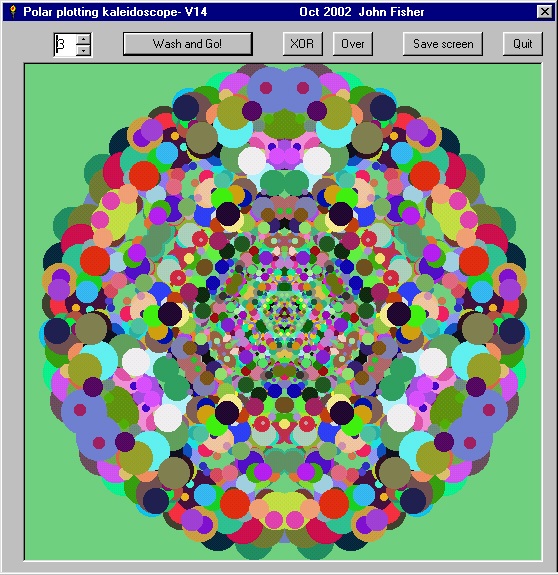 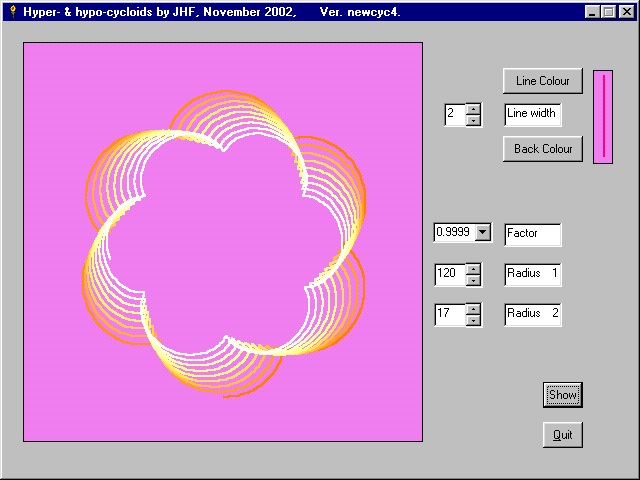 They do both produce rather nice patterns.

I have played quite a lot with high-precision numbers where importance is in every figure & no rounding to say ten places is allowed. Variations on this are my PI programs, which calculate PI with various levels of speed & precision, & by very diferent techniques including Monte Carlo methods & power series. 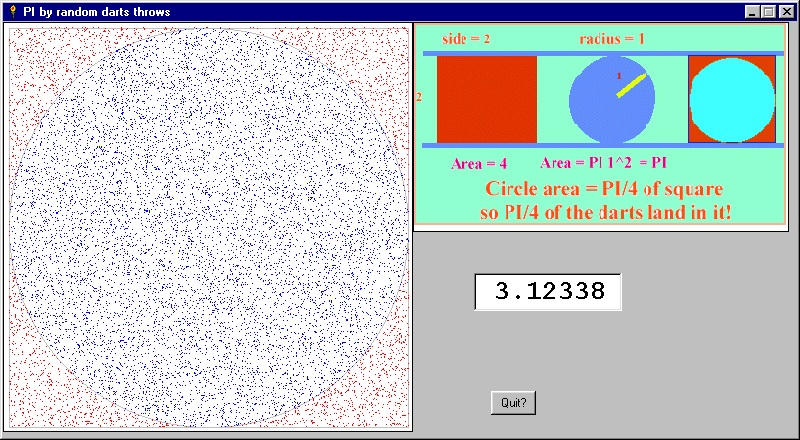 A standard descriptor for fractal shapes is demo'd in QO fractals. 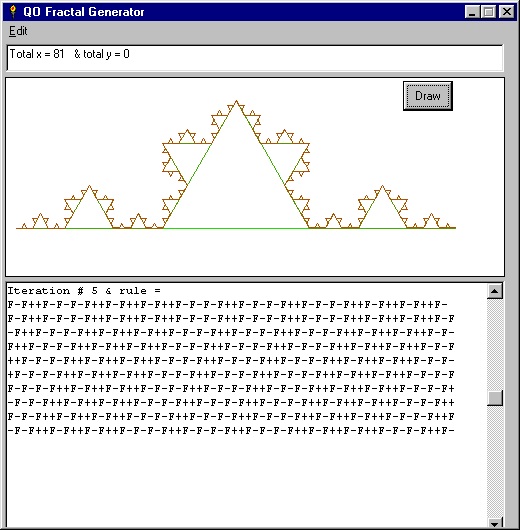 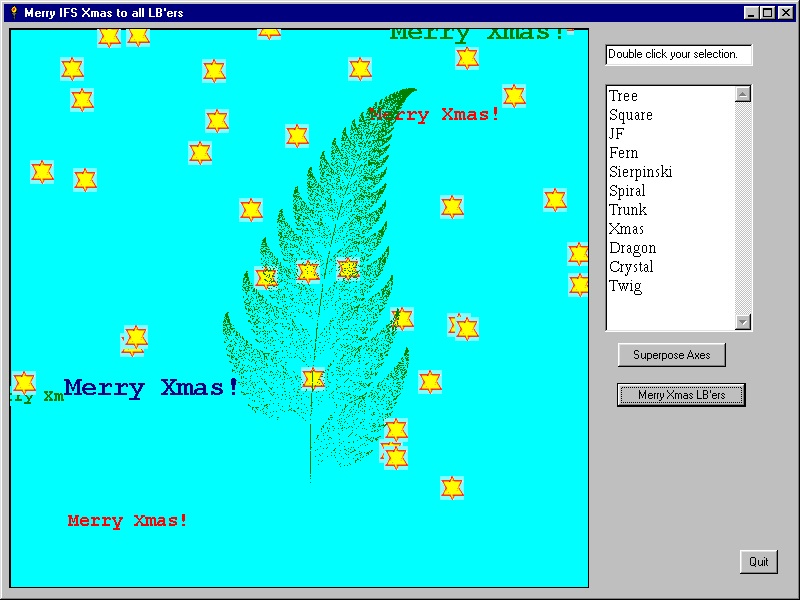 
Several circuits to run the parallel port (if you have one) as an input or output device. The image is adapted from 'Parallel Port Visualiser'- thanks!

This demonstrates that any program relying on a computer generated 'random number' should be treated cautiously!

Many thanks to Carl for hours of pleasure (& frustration)